The results of the Corporate Recruiters Survey 2019 reflect the trends in the broader economy, including the plans of companies to grow and expand and reveal the optimistic hiring projections for specialised master’s graduates.

“Employers clearly place a high value on acquiring MBA and business master’s graduates”, said Sangeet Chowfla, President and CEO of GMAC. “We are seeing a highly active candidate marketplace in terms of geographical shifts in study destinations, but the value that both employers and graduates see in graduate business education is a constant”.

We hope that the report’s findings provide business school graduates with better insights into the labour market and enable companies to keep abreast with the projections of other organisations and industries.

Overall, 2 in 3 responding companies plan to expand and grow in 2019 (64%). The percentage is the highest in the United States (66%), followed by Europe (59%), and the Asia Pacific (57%). Looking at the distribution across industries, the tech sector is the most likely to grow, followed consulting and health care.

Compared to last year’s actual hiring, a more significant share of companies intends to bring in business school talent in 2019, including MBA and Master in Management (MiM) graduates. This trend has been true over the past several years. 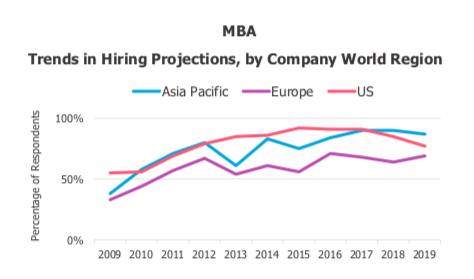 Consistent with past years, larger companies are the most likely to hire MBA talent in 2019.

Looking at the company type, it is interesting to see the biggest leap in demand for MBA talent among the start-up companies. The projected rate in 2019 reaches 62%, which 17% higher than the actual hiring ratio noted in 2018.

The hiring outlook for Master in Management (MiM) talent has moderated among US, European, and Asia-Pacific employers, as hiring projections are slightly lower in 2019 compared with recent years. In the US, MiM remains a less popular degree relative to Europe and Asia Pacific, which is therefore reflected in lower projected hiring rates (33%).

MiM hiring demand is strongest among companies in the consulting, products/services, and manufacturing industries.

Variety of business masters in demand

This year’s survey is the second time trending data on the hiring outlook for Master of Data Analytics talent was collected. Overall, the degree sees the most significant increase between the 2018 actual hiring rate (37%) and 2019 projected hiring rate (52%).

When it comes to the recruitment trends for Master of Accounting and Master of Finance, both masters are increasingly sought after in the Asia Pacific region, while the hiring projections are rather steady in Europe and decrease in the United States.

Overall, among other business master’s degrees, the Master of Information Technology tops the list of sought-after talent across all company types, followed by Master of Supply Chain and Master of Marketing. 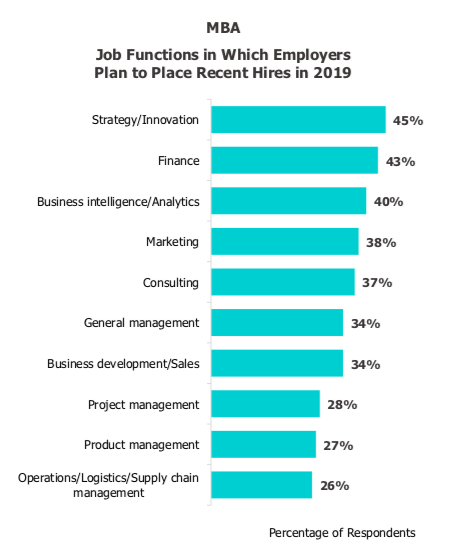 The survey reveals the top three functions companies want to see filled with MBA graduates in 2019. The three ranks are occupied by strategy/innovation, finance, and business intelligence/analytics, respectively. Consulting is the most common job for new MBAs in Asia Pacific and Europe while Strategy and finance are the most common in the US.

The MiM graduates are expected to take on roles in the areas of finance, consulting and project management, as the intentions of employers reveal. Taking a closer look at the job functions to be occupied by Master in Management graduates in Europe, 53% employers expect to onboard consulting graduates, and 60% of Asia Pacific employers are willing to place MiM new hires into marketing roles.

Overall, most employers plan to increase the starting salary of MBA graduates in 2019 (56%), including 63% of Asia-Pacific employers, 56% of US employers, and 49% of European employers.

Most European companies plan to maintain salaries at 2018 levels. The starting median salary of an MBA graduate in the European region is projected to USD95,000, and the median for Asia-Pacific companies is USD45,000.

Median salaries vary across world regions and by companies. MBAs, however, have a head start over other candidate types.

Plans for hiring international candidates in 2019 are mixed but employers maintain a high level of interest.

Reasons for not hiring international talent differ across world regions, from uncertainty about future policies and law in case of the US employers to the availability of local talent, expenditures or language barriers, cited by both European and Asia-Pacific employers.

“In recent years, we have reported on the decline in US companies hiring international students”, said Megan Hendricks, Executive Director for the MBA Career Services & Employer Alliance.  “While the data in this year’s GMAC report holds steady with regard to US business’ plans to hire foreign talent, we hope the recent H-1B visa rule change will encourage more international students to take a longer look at studying and working in the US”.

The outlook is rather favourable for business school interns, who are to be taken on board by 55% of companies overall. More than a half of European companies plan to enrol business master’s interns (57%) when compared to US employers (23%) or Asia-Pacific companies (34%), who favour MBA interns instead.

“This year’s GMAC report on MBA and GME hiring trends shows the tremendous opportunities graduates have when they finish their business studies”, said Eric Cornuel, Director General & CEO of EFMD. “The growth of quality business schools around the world has also been met with increased employment opportunities for graduates in emerging markets and regional economies. Now is an exciting time to be pursuing an MBA and business master’s degree”.

We hope that the findings and trends in hiring demands for MBA and business master’s graduates will help you stay up-to-date and better anticipate the graduate career perspectives.

Open chat
Chat with us if you have any questions about our program.
Powered by